Lots of boats in this picture.  I enjoy the contrasts of light and dark, shadow and light.  As in many of Jacob Von Rueysdale's paintings you can almost feel the wind.


Today's piece by George Philipp Telemann, Violin Concerto in A Major  is a fun piece for Spring, the subtitle is "The Frogs".  The following information comes from the YouTube post:

"The Violin Concerto in A major (TWV 51:A4), which has come to light only fairly recently, does not take as its musical model the song of the nightingale (as in 'La Bizarre' [TWV 55:G2]) or of the goldfinch (Vivaldi), but the croaking of the common frog, also called 'Reling' in certain regions of Germany, whence the concerto's subtitle. Nothing better could be expected of a composer who found inspiration even in crows and in the out-of-tune playing of village musicians! Although this concerto, which the manuscript attributes to Telemann, bears traces of his personal style, other features, such as the exceptionally high solo part, leave room for doubt. At a structurally important point in the first movement the soloist produces no more than a succession of repeated notes, 'a-a, a-a', which infect the other parts as well. Of course, this is the vowel that the frog croaks, given a distinctive tone-colour by use of the open A string and stopped D string. But worse is to come. In the second ritornello the orchestral violins 'forget' the beginning of their theme, whilst the cello inappropriately pushes its way into the foreground. The setting of the second movement (Adagio), probably a moonlit stretch of shallow water, then audibly inspires a pair of courting frogs to make sweet music together. We are given the opportunity to rejoice in their croaking offspring in the concluding Menuet and its rapid Double. This movement entirely dispenses with concertante sounds of nature and thereby betrays its origins in the suite, where it always takes its accustomed place in Telemann's music. If we knew that a satirist was at work in this 'Relinge' Concerto, someone who was deliberately exhibiting all these deviations from good taste, then we could infer with some certainty that the composer is indeed Telemann. Since his own concertos 'smack of France' (as he puts it in his autobiography of 1718), we may most likely credit him with permitting his not at all 'sullen old heart' a little joke at the expense of the relevant concertos of a certain Italian composer..." - Peter Huth (trans. Charles Johnston)


Here is a link to the "Best of Telemann"

A.A.Milne's poetry has a sense of childish humor to it - today's poem is no exception.

Ernest was an elephant, a great big fellow,
Leonard was a lion with a six foot tail,
George was a goat, and his beard was yellow,
And James was a very small snail.

Leonard had a stall, and a great big strong one,
Earnest had a manger, and its walls were thick,
George found a pen, but I think it was the wrong one,
And James sat down on a brick

Earnest started trumpeting, and cracked his manger,
Leonard started roaring, and shivered his stall,
James gave a huffle of a snail in danger
And nobody heard him at all.

Earnest started trumpeting and raised such a rumpus,
Leonard started roaring and trying to kick,
James went on a journey with the goats new compass
And he reached the end of his brick.

Ernest was an elephant and very well intentioned,
Leonard was a lion with a brave new tail,
George was a goat, as I think I have mentioned,
but James was only a snail.


I would love to visit this castle painted by Jacob von Rueysdale!  All the angles would be fun to try to draw - or if that is too complex for your young students, they could use tracing paper to trace the rooflines.

Our poem today by A.A.Milne is
Halfway Down

Halfway up the stairs
Isn't up
And it isn't down.
It isn't in the nursery,
It isn't in town.
And all sorts of funny thoughts
Run round my head.
It isn't really
Anywhere!
It's somewhere else
Instead!

I really like the light as it falls on the water here as well as on the mill front and wall on the right in this painting by Jacob Von Rueysdale.  The whole picture has a feel of cold and wind and you can almost hear the water rushing through the mill dam.
A lovely, peaceful, classical guitar piece today composed by  Georg Philipp Telemann - Dolce

And a poem by A.A. Milne

Wind on the Hill

Jacob von Rueysdale - Sailboats, Georg Philipp Telemann - Water Music in C; A A Milne - Come Out with Me

You can almost feel the wind in this wonderful painting by Jacob von Rueysdale.  All the lovely pastel colors in those wonderful cumulus clouds make me want to try painting it! 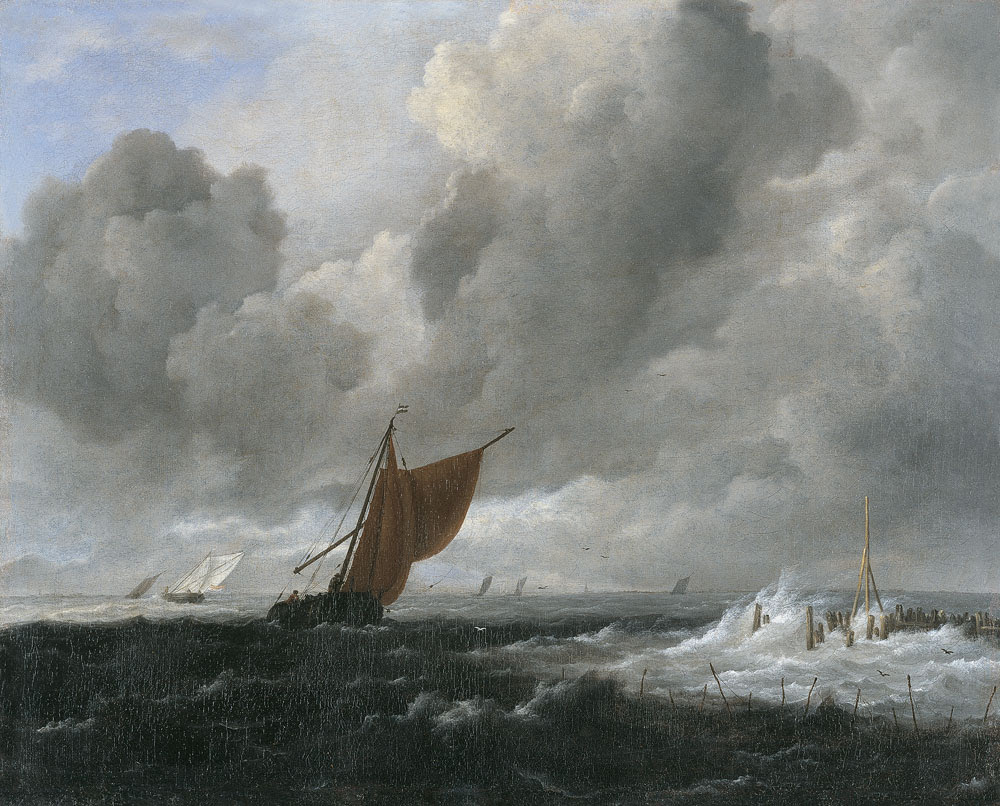 Georg Philipp Telemann's wassermusik (Water Music) in C is as dramatic as the above painting.  Full of tension and exuberance.

Today's poem by Alan Alexander Milne tugs at my heart and reminds me to take the time to just explore outside with my children while I have them with me.


Come Out with Me

There's sun on the river and sun on the hill . . .
You can hear the sea if you stand quite still!
There's eight new puppies at Roundabout Farm-
And I saw an old sailor with only one arm!

There's wind on the river and wind on the hill . . .
There's a dark dead water-wheel under the mill!
I saw a fly which had just been drowned-
And I know where a rabbit goes into the ground!