Our last painting by Albert Anker is of a lovely young girl knitting.  I use four needles to knit like this when I make sleeves or socks.  I love the color of her skin and the curly wisps of hair around her face.  Do you or any of your children like to knit? 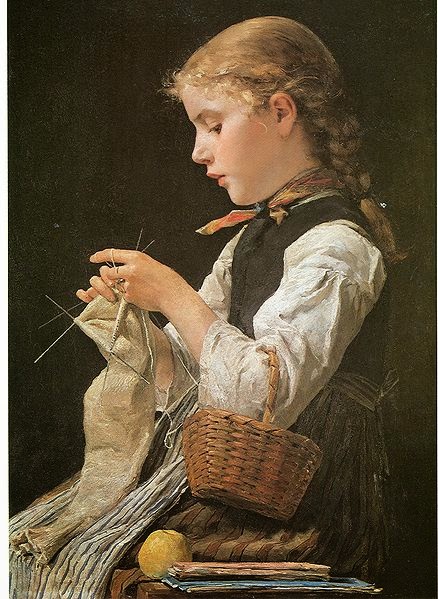 Our final work by Hector Berlioz is Les Troyens - Royal Hunt and Storm.

I don't know if it's really fitting to choose this poem as the last by Robert Browning, but he has a lot of wisdom and sees things from a different angle than most and isn't afraid to take on difficult subjects to make his point.  Here he describes visiting Paris for the baptism of the prince and then walking along the Seine River and visiting the morgue.  He talks about three men he saw there that had drowned themselves in the river and surmises what their lives were like and why they had wanted to end it all.  He completes his poem with some sound wisdom on what to seek in life -"It’s wiser being good than bad;  It’s safer being meek than fierce: It’s fitter being sane than mad." and "what began best, can’t end worst, Nor what God blessed once, prove accurst."

Most of Albert Anker's paintings were people.  Since our daughter is getting married later this summer I decided to feature today's painting of the signing of a marriage license. 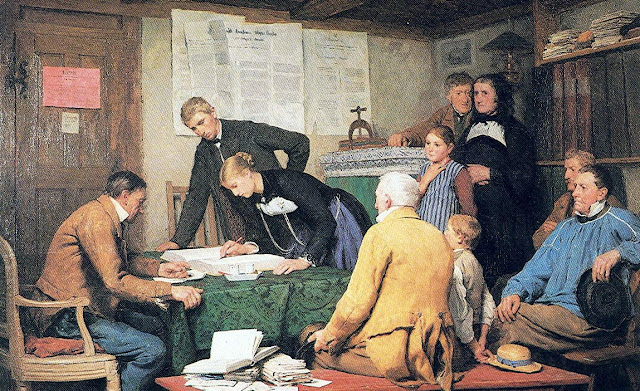 One of the things I've noticed about Robert Browning's poetry is that it is deep and not always to be understood on the surface or even with careful reading.  But it is beautiful and worth reading and reading again and I guess like with Scripture we take away what we are able and ready for and come back later for more.  Today's poem is no exception.  He's describing a wall, but not really talking about just a wall:

Such sweet expressions in this Albert Anker painting.  There are tell-tale details in furnishings and setting that are interesting to note. 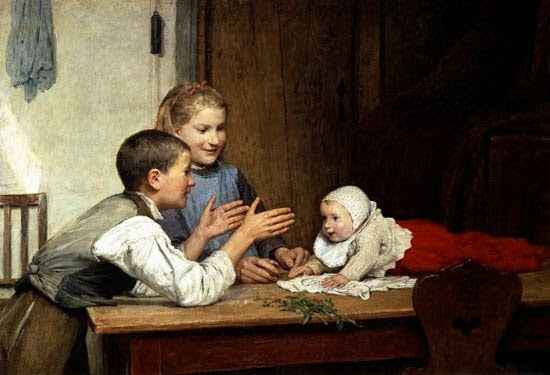 Today we'll listen to the second part of Harold in Italy - Harold in the Mountains Part II.  Hector Berlioz's music is dramatic and intense.

You may or may want to quit reading at line 37 as the last bit of the poem may not be suitable for young children - but I appreciate Robert Browning's twist of sarcastic humor and insight into humanity, and the poem is a good story.

Tray
Sing me a hero! Quench my thirst
Of soul, ye bards!
Quoth Bard the first:
"Sir Olaf, the good knight, did don 3
His helm, and eke his habergeon ..."
Sir Olaf and his bard----!
"That sin-scathed brow" (quoth Bard the second), 6
"That eye wide ope as tho' Fate beckoned
My hero to some steep, beneath
Which precipice smiled tempting Death ..."
You too without your host have reckoned! 10
"A beggar-child" (let's hear this third!)
"Sat on a quay's edge: like a bird
Sang to herself at careless play,
And fell into the stream. 'Dismay!
Help, you the standers-by!' None stirred.
"Bystanders reason, think of wives
And children ere they risk their lives.
Over the balustrade has bounced
A mere instinctive dog, and pounced
Plumb on the prize. 'How well he dives! 20
"'Up he comes with the child, see, tight
In mouth, alive too, clutched from quite
A depth of ten feet--twelve, I bet!
Good dog! What, off again? There's yet
Another child to save? All right!
"'How strange we saw no other fall!
It's instinct in the animal.
Good dog! But he's a long while under:
If he got drowned I should not wonder--
Strong current, that against the wall! 30
"'Here he comes, holds in mouth this time
--What may the thing be? Well, that's prime!
Now, did you ever? Reason reigns
In man alone, since all Tray's pains
Have fished--the child's doll from the slime!'
"And so, amid the laughter gay,
Trotted my hero off,--old Tray,--
Till somebody, prerogatived
With reason, reasoned: 'Why he dived,
His brain would show us, I should say. 40
"'John, go and catch--or, if needs be,
Purchase that animal for me!
By vivisection, at expense
Of half-an-hour and eighteen pence,
How brain secretes dog's soul, we'll see!'"
Posted by Patti at 6:22 AM No comments:

Are you enjoying summer yet?  For me, it gets harder to set aside the time for art, music, and poetry as we take summers off from formal schooling to garden.  But then, we also find so many more natural opportunities for nature study and exploration, which makes summer a pleasure.  For the past few summers we've tried to fit most of our work into Monday through Thursday so we can clean house quick Friday morning and head to a local park for lunch and nature time, swimming, hiking, and playing on the playground.  The older girls often bring a book and Lizzy sometimes brings her harp - it's very peaceful and relaxing.  I'm looking forward to our Fridays at the park this summer.  This week's painting by Albert Anker looks like a grand nature walk in progress. 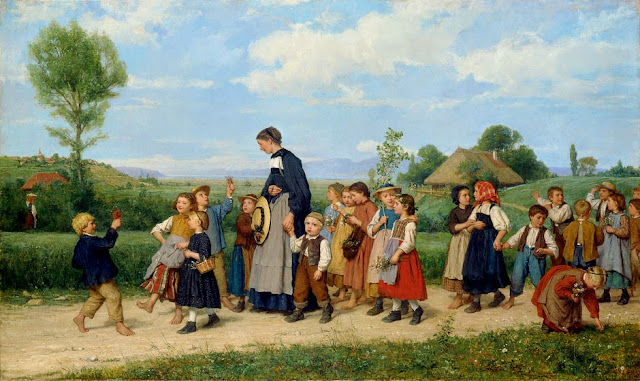 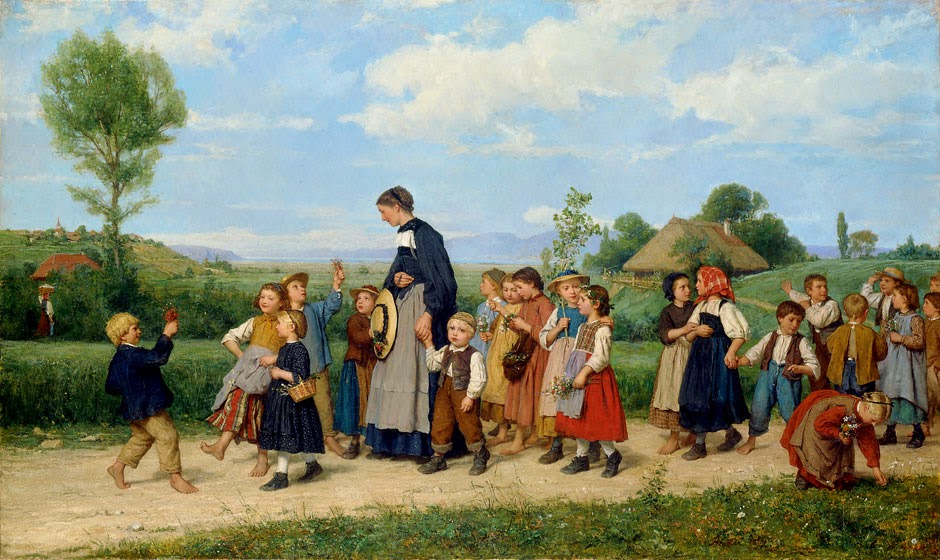 Today's piece of music by Hector Berlioz is from Harold in Italy.  You can listen to the First Movement of Harold In Italy here. I like the part featuring the viola.  Here is Wikipedia's article on Harold in Italy.  You can also listen to the entire work here.  You may also want to pursue the poem that this work is named for Childe Harold's Pilgrimage by Lord Byron and the poem itself - Gutenburg Project's Childe Harold's Pilgrimage.  I haven't read this poem yet, but it may see if I can find time yet this week.


Our poem this week by Robert Browning
A Tale