Looking for this week's painting, I came upon this interesting biographical sketch about the life and character of Ivan Aivasovsky.
There are seven pages of images if you click at the top of the page there on one of the numbers following the "image galleries".  You may like paintings other than the ones I have chosen to share with your children.  There are lots of details to study in this painting as well as wonderful colors.  Notice how the warm yellows and oranges are on the left on the top and on the right on the bottom and the wonderful cool blue greens are on the right on top and the left on the bottom - wonderful contrast!

Today part 3 of Billy the Kid by Aaron Copland.
I can't say I'm really enjoying his music, but my children have been more open minded about it....


A man saw the whole world as a grinning skull and cross-bones. The rose flesh of life shriveled from all faces. Nothing counts. Everything is a fake. Dust to dust and ashes to ashes and then an old darkness and a useless silence. So he saw it all. Then he went to a Mischa Elman concert. Two hours waves of sound beat on his eardrums. Music washed something or other inside him. Music broke down and rebuilt something or other in his head and heart. He joined in five encores for the young Russian Jew with the fiddle. When he got outside his heels hit the sidewalk a new way. He was the same man in the same world as before. Only there was a singing fire and a climb of roses everlastingly over the world he looked on.
Posted by Patti at 6:58 AM 2 comments:

Most of Ivan Aivazovsky's works are ships at sea, but, though it's not the first thing you notice, this painting also includes water in the little brook running along the right side.
Billy the Kid Part 2 by Aaron Copland.  We listened to part 1 last week and will have part 3 next week.

Child by Carl Sandburg
The young child, Christ, is straight and wise
And asks questions of the old men, questions
Found under running water for all children
And found under shadows thrown on still waters
By tall trees looking downward, old and gnarled.
Found to the eyes of children alone, untold,
Singing a low song in the loneliness.
And the young child, Christ, goes on asking
And the old men answer nothing and only know love
For the young child. Christ, straight and wise.

I love the colors in this painting by Ivan Aivasovsky.


"Billy the Kid"Part 1 by Aaron Copland

This thought-provoking poem today by Carl Sandburg  - "At a Window"


Give me hunger,
O you gods that sit and give
The world its orders.
Give me hunger, pain and want,
Shut me out with shame and failure
From your doors of gold and fame,
Give me your shabbiest, weariest hunger!

But leave me a little love,
A voice to speak to me in the day end,
A hand to touch me in the dark room
Breaking the long loneliness.
In the dusk of day-shapes
Blurring the sunset,
One little wandering, western star
Thrust out from the changing shores of shadow.
Let me go to the window,
Watch there the day-shapes of dusk
And wait and know the coming
Of a little love.

Another wonderful seascape by Ivan Aivazovsky. I like the blues and greens against the pink and peach and the outline of the full moon still in the sky as the sun comes up or perhaps as it sets. The ships are interesting, too.  Amazing motion in the sea with foam and still reflecting the colorful sky.


Lots to think about in today's poem by
Carl Sandburg


A Father to His Son


A father sees his son nearing manhood.
What shall he tell that son?
'Life is hard; be steel; be a rock.'
And this might stand him for the storms
and serve him for humdrum monotony
and guide him among sudden betrayals
and tighten him for slack moments.
'Life is a soft loam; be gentle; go easy.'
And this too might serve him.
Brutes have been gentled where lashes failed.
The growth of a frail flower in a path up
has sometimes shattered and split a rock.
A tough will counts. So does desire.
So does a rich soft wanting.
Without rich wanting nothing arrives.
Tell him too much money has killed men
and left them dead years before burial:
the quest of lucre beyond a few easy needs
has twisted good enough men
sometimes into dry thwarted worms.
Tell him time as a stuff can be wasted.
Tell him to be a fool every so often
and to have no shame over having been a fool
yet learning something out of every folly
hoping to repeat none of the cheap follies
thus arriving at intimate understanding
of a world numbering many fools.
Tell him to be alone often and get at himself
and above all tell himself no lies about himself
whatever the white lies and protective fronts
he may use against other people.
Tell him solitude is creative if he is strong
and the final decisions are made in silent rooms.
Tell him to be different from other people
if it comes natural and easy being different.
Let him have lazy days seeking his deeper motives.
Let him seek deep for where he is born natural.
Then he may understand Shakespeare
and the Wright brothers, Pasteur, Pavlov,
Michael Faraday and free imaginations
Bringing changes into a world resenting change.
He will be lonely enough
to have time for the work
he knows as his own.
Posted by Patti at 7:14 AM No comments:

Another wonderful seascape by Ivan Aivazovsky -
"It depicts a sea after a night storm and people facing death attempting to save themselves by clinging to debris from a wrecked ship.
The painting has warm tones in which the sea appears to be not so menacing and giving a chance for the people to survive.
This painting is often called "the most beautiful painting in Russia.
Both English and Russian titles refer to the nautical tradition that waves grow larger and larger in a series up to the largest wave, the ninth (or tenth) wave, at which point the series starts again." From Wikipedia's entry 'The Ninth Wave'.
seems almost like you can see light through the waves 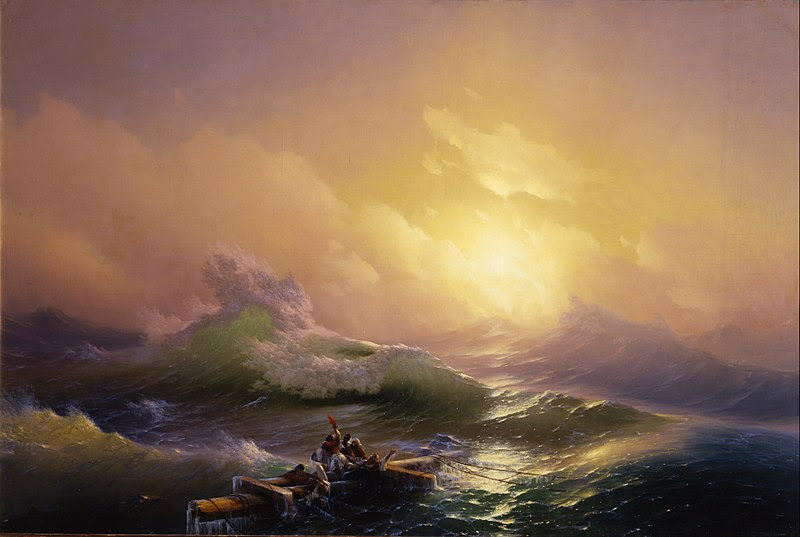 Concerto for Clarinet and String Orchestra


Fall used to be my favorite time of year but the older I get the more I feel the sadness of coming winter and how quickly the color and beauty pass.  This poem captures that sadness.


The field of cornflower yellow is a scarf at the neck of the copper
sunburned woman, the mother of the year, the taker of seeds.

The northwest wind comes and the yellow is torn full of holes,
new beautiful things come in the first spit of snow on the northwest wind,
and the old things go, not one lasts.
Posted by Patti at 6:10 AM No comments: