Today's painting by Jean-Baptiste-Camille Corot looks like a lovely path to take for a nature walk.  There's an interesting story here  about another Corot painting and a neighbor of his.  The article suggests that today's painting is based on this same area. 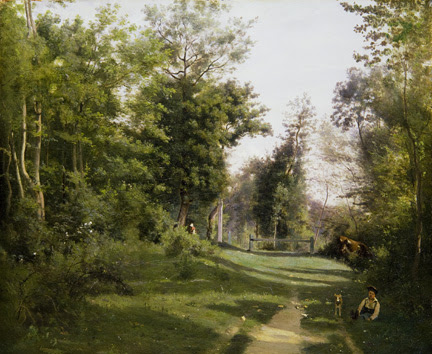 John Philip Sousa's march featured today is The Washington Post March.  It was familiar to me, I don't know if it will be to you or not - either way I hope you enjoy it.

Robert Louis Stevenson wrote so many wonderful children's poems, I find them wonderful for memorizing and quoting.  Even though they were written for children they still appeal to me as an adult!
We're studying astronomy this year, this poem fits well with our study of the sun....


The Sun's Travels
From Child's Garden of Verses

The more I read John Milton's poems the more I admire him. I've been reading The Poems of Milton by James Holly Hanford this week.  The introduction gives a wonderful overview of his life and then he gives a short introduction to each of the poems in the book.  I read part of Paradise Lost today, which is broken down into 12 books or sections.  The following is a beautiful section from book three describing a conversation between God and His Son in Heaven as Satan is making his way to the garden to tempt Adam and Eve. Here is a link to the whole poem.   A short excerpt follows:

Onely begotten Son, seest thou what rage [ 80 ]
Transports our adversarie, whom no bounds
Prescrib'd, no barrs of Hell, nor all the chains
Heapt on him there, nor yet the main Abyss
Wide interrupt can hold; so bent he seems
On desparate reveng, that shall redound [ 85 ]
Upon his own rebellious head. And now
Through all restraint broke loose he wings his way
Not farr off Heav'n, in the Precincts of light,
Directly towards the new created World,
And Man there plac't, with purpose to assay [ 90 ]
If him by force he can destroy, or worse,
By some false guile pervert; and shall pervert
For man will heark'n to his glozing lyes,
And easily transgress the sole Command,
Sole pledge of his obedience: So will fall, [ 95 ]
Hee and his faithless Progenie: whose fault?
Whose but his own? ingrate, he had of mee
All he could have; I made him just and right,
Sufficient to have stood, though free to fall.
Such I created all th' Ethereal Powers [ 100 ]
And Spirits, both them who stood and them who faild;
Freely they stood who stood, and fell who fell.
Not free, what proof could they have givn sincere
Of true allegiance, constant Faith or Love,
Where onely what they needs must do, appeard, [ 105 ]
Not what they would? what praise could they receive?
What pleasure I from such obedience paid,
When Will and Reason (Reason also is choice)
Useless and vain, of freedom both despoild,
Made passive both, had servd necessitie, [ 110 ]
Not mee. They therefore as to right belongd,
So were created, nor can justly accuse
Thir maker, or thir making, or thir Fate,
As if predestination over-rul'd
Thir will, dispos'd by absolute Decree [ 115 ]
Or high foreknowledge; they themselves decreed
Thir own revolt, not I: if I foreknew,
Foreknowledge had no influence on their fault,
Which had no less prov'd certain unforeknown.
So without least impulse or shadow of Fate, [ 120 ]
Or aught by me immutablie foreseen,
They trespass, Authors to themselves in all
Both what they judge and what they choose; for so
I formd them free, and free they must remain,
Till they enthrall themselves: I else must change [ 125 ]
Thir nature, and revoke the high Decree
Unchangeable, Eternal, which ordain'd
Thir freedom, they themselves ordain'd thir fall.
The first sort by thir own suggestion fell,
Self-tempted, self-deprav'd: Man falls deceiv'd [ 130 ]
By the other first: Man therefore shall find grace,
The other none: in Mercy and Justice both,
Through Heav'n and Earth, so shall my glorie excel,
But Mercy first and last shall brightest shine.
Thus while God spake, ambrosial fragrance fill'd [ 135 ]
All Heav'n, and in the blessed Spirits elect
Sense of new joy ineffable diffus'd:
Beyond compare the Son of God was seen
Most glorious, in him all his Father shon
Substantially express'd, and in his face [ 140 ]
Divine compassion visibly appeerd,
Love without end, and without measure Grace,
Which uttering thus he to his Father spake.
O Father, gracious was that word which clos'd
Thy sovran sentence, that Man should find grace; [ 145 ]
For which both Heav'n and Earth shall high extoll
Thy praises, with th' innumerable sound
Of Hymns and sacred Songs, wherewith thy Throne
Encompass'd shall resound thee ever blest.

Here is a link to Librivox's audio version of Paradise Lost.  You can listen to it book by book (read by various authors).  Librivox also has other recordings of poems by John Milton.

If you are enjoying Milton and want to study him further or have older students who would enjoy knowing more,  you may enjoy a Yale University course free online here.  The link Here  is to a Youtube video of the above instructor's lecture on the third book of Paradise Lost including his interpretation and ideas about the above section of the poem.
Posted by Patti at 7:49 AM