I'd like to feature a mural this week.  Raphael painted several frescoes in the palace in the Vatican in Rome.  This first picture shows the room, the second is the mural itself. 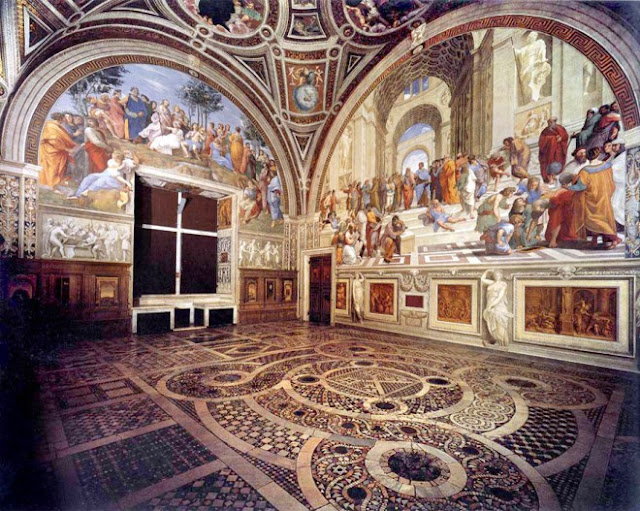 If you compare the figures in the painting with the door beneath them in the picture of the room, it looks like the figures are full sized - as if they were real people.  It would be wonderful to stand in this room and study this painting up close.  This painting includes many of the great philosphers - the central figures are Plato and Aristotle.  " Commentators have suggested that nearly every great ancient Greek philosopher can be found in the painting, but determining which are depicted is difficult, since Raphael made no designations outside possible likenesses, and no contemporary documents explain the painting."  " What is evident is Raphael’s artistry in orchestrating a beautiful space, continuous with that of viewers in the Stanza, in which a great variety of human figures, each one expressing "mental states by physical actions," interact, in a "polyphony" unlike anything in earlier art, in the ongoing dialogue of Philosophy." From the Wikipedia Article


You may be interested in Wikipedia's entry on this Frescoe.  It includes possibilities of who the philosophers might be and close-ups of some of them.  - The School of Athens - Wikipedia.

Our music this week by Antonio Vivaldi is Bassoon Concertos beginning with Concerto A Minor.


Vivaldi's music is so light and happy....

If you haven't read it yet, I recommend the children's picture book, I Vivaldi.  It gives a short, but sweet introduction to his life.

What do you think of Rainer Maria Rilke's poems so far?  They are definitely different, but interesting.  Today's poem is short but thought provoking and even through the translation by Robert Bly you sense a beauty in the words.

My eyes already touch the sunny hill.
going far ahead of the road I have begun.
So we are grasped by what we cannot grasp;
it has inner light, even from a distance-

and charges us, even if we do not reach it,
into something else, which, hardly sensing it,
we already are; a gesture waves us on
answering our own wave...
but what we feel is the wind in our faces.


And our poem by Robert Louis Stevenson this week is